This vertical column of ancient Mayan glyphs was painted on stone found in a Guatemalan pyramid complex dating back to between 200 B.C. and 300 B.C. and show the Maya were writing at a complex level 150 years earlier than previously thought, though simple glyphs are dated to as early as 600 B.C.

They were found on preserved painted walls and plaster fragments in the pyramidal structure known as Las Pinturas, in San Bartolo, Guatemala. 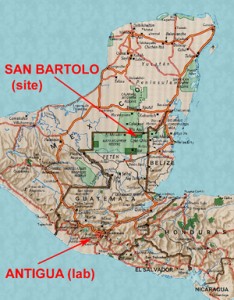 The writing is completely different than the Zapotec writing and indicates they are not simple derivatives of each other.

Though a lot is now known of Mayan writings it is not known what these glyphs say.

Full article is here is printed on MSNBC.