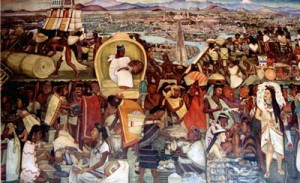 The section of the main site MesoAmericas.com for the people of the ancient cultures has been started. Here is the first paragraph:

The earliest known civilization in Mesoamerica is the Olmec. It appears they are the genesis of most of the aspects of the Mesoamerican cultures. The form of their government, pyramid-temple building, writing, astronomy, art, mathematics, economics and religion became the template for succeeding cultures. The questions of where the Olmec received their inspiration and knowledge, not to mention the required force, to create the Mesoamerican culture is rarely examined deeply.