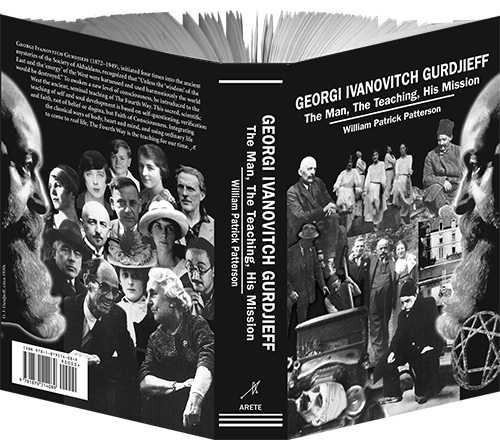 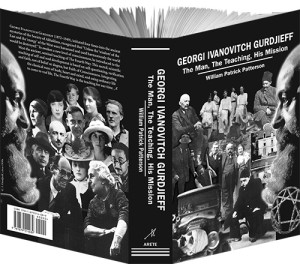 The book Georgi Ivanovitch Gurdjieff – The Man, The Teaching, His Mission is a work of immense power and love by William Patrick Patterson, a teacher of “the Work,” as Gurdjieff’s teaching is called and the author/ producer of several books and videos on the subject. It is over 600 pages long (over 400 narrative with 200 supplementary) and is a painstakingly precise account of two figures little known in the mass media, almost overlooked in popular history, and yet who may have been among the greatest thinkers of their time.

Georgi Ivanovitch Gurdjieff (G) appeared in St. Petersburg in 1916; P.D. Uspenskii (as Patterson refers to him) met him shortly thereafter and it later turned out that Gurdjieff had sought him out for his writing ability and notoriety in intellectual circles to help build his following. Patterson has gone through the personal papers and books of Gurdjieff’s students and G’s own writings to piece together his early years, including his brush with death and his apparent teachers, as well as the society of seekers of which he was a member before he appeared in St. Petersburg. Patterson himself has written extensively about the teaching and some of the material, for example the section on the women who studied with Gurdjieff in Paris (a group called the “Rope”) presumably echoes his earlier work, Ladies of the Rope. Patterson has also pieced together the early life of P.D. Uspenskii, including his own searches for ancient wisdom and personal relationships, and brings the two men together in the strange circumstances that were pre-revolution Russia, circa 1916.

But what is extraordinary is how Patterson describes Gurdjieff’s method, wonderfully echoing Uspenskii’s own description of how he was exposed to the teaching which is the spine of Uspenskii’s great work, In Search of the Miraculous. Prospective students were introduced mysteriously and led to a strange space with Persian carpets and strange artifacts, where they met a man they each described as unique, powerful, insightful and with the capacity to see right through them. Everything was kept secretive and private. You had to know someone who knew someone to meet Gurdjieff and become a follower in St. Petersburg, and also later. It was also made clear that if one did not seize the opportunity to take advantage of the moment, one might never get another chance.

Uspenskii became convinced that Gurdjieff had access to ancient wisdom and wanted it for himself—but Patterson describes how at various turns Gurdjieff “played” with his individualistic personality to try to make him see his own habitual tendency—that is, to live in his head and not his heart.

The Gurdjieff/Uspenskii groups fled the Bolsheviks and survived many hardships, often through luck and more often through Gurdjieff’s cunning understanding of human nature. Eventually Uspenskii could not continue to accept many of Gurdjieff’s methods and peculiarities and broke away, although his wife continued on with Gurdjieff for some time.

Gurdjieff admired the energy and power of America and also satirized the materialism of the United States, and used his visits to raise capital by “shearing” the wealthy to subsidize the work and the lessons of the less fortunate. Patterson spans decades as he follows Gurdjieff to his Prieure (institute) in Paris and describes his methods of hard work to break the conditioning of students—intelligentsia would clean toilets and garden—and his conversations over meals and in cafes where students would toast themselves as various kinds of “idiots.”

A major part of being an “idiot” is believing in the imaginary concepts of the mind as opposed to what one has gotten for oneself. At one point he hears Gurdjieff’s voice in his head with nothing being said verbally. This is precisely the sort of “miracle” Uspenskii had been seeking and yet he needed to analyze it and could not simply accept it as a clear indication of his position under his teacher and his need to sublimate his own formative mind and the “need to know.”

All of these mysterious aspects are hinted at and yet not posited authoritatively by Patterson, the consummate researcher and observer. What is posited is simply that such events occurred—the meaning and interpretation (the knowing) remains a mystery. Finally Uspenskii broke completely with Gurdjieff and founded his own school, first in England during the Second World War and then in the United States.

As Patterson calls the teaching a “sacred science,” what Gurdjieff saw in Uspenskii was the ability to convey his “system” scientifically, due to his great intelligence. This would make it a bridge between East and West and comprehensible in terms of the Renaissance and Enlightenment in the West. Where Uspenskii fell short, apparently, was his own egoism and coldness—he did not seem to manifest Gurdjieff’s own capacity for kindness and compassion. He did not live the Work as much as he seemed to relish the role of revered and admired teacher/ writer.

As you read through the dialogues and studies you can’t help but see the threads of modern New Age thought as well as teachings like Advaita and Nonduality, along with the historical motifs of Theosophy and mysticism that were concurrent with Gurdjieff’s arrival on the scene.

For example Krishnamurti’s teaching galvanized Americans, and Uspenskii is asked about him at one point:
“He says a system cannot awake a man. Certainly it cannot. Mathematics cannot build a bridge. But if a bridge is built without mathematics, it collapses. If Krishnamurti keeps to this point of view—he will not be alone. Many people believe in spontaneous awakening, just be realization, and without a system and without following another man!”

Here we can sense the immensity of Gurdjieff’s contribution in its effect on Uspenskii, a man who wants scientific proof of miracles but has been opened to the limitations of science by his teacher, Gurdjieff, who brought a system of “sacred science” that bridged the heart and formatory (left brain) mind (Ego).

It was no small feat that Gurdjieff attempted to introduce this system in the “Christian” west at a time when conventional religion ran the show. True Christianity was a sacred science which attempted to confront life in its full grandeur and immensity from a position of awe.

This is reminiscent of the “neters” of Egypt, where deities represented the organic reality of natural forces like the wind, sun, tide and so on, in which man plays his part naturally and without the urge to “conquer” nature. (Interested readers might look up Patterson’s DVD, Gurdjieff in Egypt which traces the author’s own journey to Cairo and his description of Gurdjieff’s sources and influences.)

But where Gurdjieff diverges with modern Western religion is in its anthropomorphism and personalization of a “God.” God and all of the vital life forces exist for Gurdjieff but at a level beyond man’s scientific and logical comprehension. All is impersonal and impartial, even sex.

This goes against much of modern pop culture, psychology, conventional thought and religion and also rubs against parts of our interior conditioning— since we are committed to notions of romantic love. Gurdjieff’s “love” is seemingly an impersonal and objective love of What Is—the Great System that he brings to light and tries to convey to his students both through his lectures and perhaps more importantly, through the drama that was his own Life.

In Patterson’s enormous breadth of research and narration he truly delivers the reader into the full context of the historical period that is no more—before computers and the Internet—where these two men in fact anticipated such scientific wonders and saw the vast intelligence that is inherent in what Gurdjieff referred to as “Great Nature.”

Many kinds of reader will profit immeasurably from Patterson’s work. Interested seekers like me, who never fully committed to a “school” but were intrigued by the legend of both men and their system will gain a profound understanding of the meaning and sense of “the Work” including its historical context and the unique individuals who came in and out of the teaching. The tenor of the time is illustrated with wonderful photographs of the surroundings in early 20th Century France, Russia and the United States, and portraits the main players, along with the pithy commentary.

I am sure that direct students of the disciples of Lord Pentland’s line to Uspenskii and Gurdjieff will gain a great deal more in terms of both historical context and insight to the machinations and methodologies of their teachers and fellow students. Again this amazing biography is a work of great tribute and love by a truly devoted student and teacher.