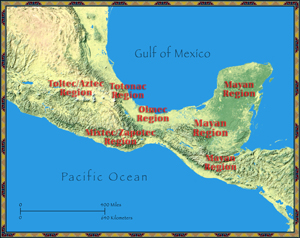 Mesoamerica extends from central Mexico to central Honduras and northwestern Costa Rica. It is also defined by shared cultural traits; religious beliefs, art, architecture, linguistics and mythology. Certainly more of their cultural traits are now known, yet these ancient Mesoamerican cultures of the Olmec, Teotihuacan, Toltec, Mayan and others still retain their mystery.

The external form of Mesoamerican cultures seem to be antithetical to the modern western “rational” mind, yet their science and astronomy reached a level surpassing Europe during the same time period. Their cultural expression is defined by hieroglyphic/pictographic/ideographic writing systems, architecture—city layouts and building structures according to the position of the Earth in relation to the Heavens, astronomical knowledge giving very accurate calendar systems, the 365-day solar calendar and the 260 day ritual calendar, transmission of knowledge through myth and oral traditions, a vigesimal (base-20) numeral system, the ritual ballgame, and sacrifice. Because the outer expression is the form of the idea it contains or the deviation of the original idea, what knowledge was intrinsic to this culture?

The locus of the knowledge expressed through their writing systems, astronomical observations, architecture and myth was their religion. This religion began with a Supreme Being or creator God from which everything came into existence, for the Aztecs it was Ometeotl and for the Mayans it was Itzamna. Because this was the focus of their culture, it allowed and supported the people of this culture to approach the fundamental questions of life and the metaphysical.

It appears the civilization of the Mesoamerican region began with the Olmec culture whose values, customs and mythology influenced the others following them; the Toltec, Mayan, Teotihuacan, Mixtec, Zapotes and Aztec cultures. The mother culture of the Olmec gave birth to the others. What spurred the Olmec people to develop and gave their culture such a lasting and wide spread influence? These are the questions MesoAmericas is researching and intends to understand.