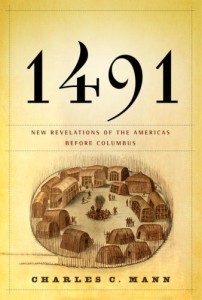 1491: New Revelations of the Americas Before Columbus is a 2005 non-fiction book by American author and science writer Charles C. Mann about the pre-Columbian Americas. The book argues that a combination of recent findings in different fields of research suggests that human populations in the Western Hemisphere—that is, the indigenous peoples of the Americas—were more numerous, had arrived earlier, were more sophisticated culturally, and controlled and shaped the natural landscape to a greater extent than scholars had previously thought.

There is much more to read in this book than the above summary and many surprising aspects to the North & South American and Mesoamerican cultures before Columbus. Well worth the read.