It appears the Mayans used sweat houses some 3,000 years ago, even before the Roman baths. Why would they have a sweat house when they lived in the tropics? What does Gurdjieff say on this subject? He writes in All and Everything about the five Being-Obligolnian-Strivings, the first of which is  “To have in their ordinary being-existence everything satisfying and really necessary for their planetary body.” In this connection he also writes specifically of this custom of going to the sauna or as he states it using the “hammam”:

“In order to clearly understand the necessity for this second custom . . . the process of their nourishment with the second being-food, which your favorites call ‘breath of air,’ proceeds in them, and this nourishment is taken in not only through the organs of breathing, but also through what are called the ‘pores’ present in their skin.

“These unnecessary parts should be given off from the said ‘pores’ of the skin of beings by evaporation gradually by themselves . . .

“Now, when your favorites invented the covering of  themselves with what are called ‘clothes,’ then, since these clothes of theirs began to hinder the normal elimination or evaporation of those parts of the second being-food unnecessary for the planetary body . . . they, condensing, began to form in these various pores of their skin the accumulation of a certain ‘oily-something.’

“From that time on, among a number of other factors, this also began to aid in the formation on this ill-fated planet of innumerable and various illnesses which taken together are the chief cause of the gradual shortening of the length of the existence of these unfortunates.

“a wise and learned being by name ‘Amabakhlootr,’ also from the continent Asia there, once clearly constated during this conscious observations of various facts proceeding around him, that this ‘oily-something’ which collects in the pores of the skin, has also a maleficent influence on the general functioning of the whole planetary body . . .

“As a result of the investigations and long deliberations of this Amambakhlootr . . . they arrived at the conclusion and became convinced of the impossibility of obtaining that beings similar of themselves should not wear clothes, and that it was necessary to seek a method for artificially eliminating from the pores of the skin these remains of the ‘second-food’ . . .

“Their further elucidatory experiments showed them that the cleansing of the ‘pores’ of the skin from these deposits was possible only by means of slow warming, thanks to which, this deposited ‘oily-something’ acquires the possibility of gradually dissolving and being eliminated from the pores of the skins of beings.

“Well, for this purpose, they then invented and actualized in practice special rooms which later came to be called hammams . . .” 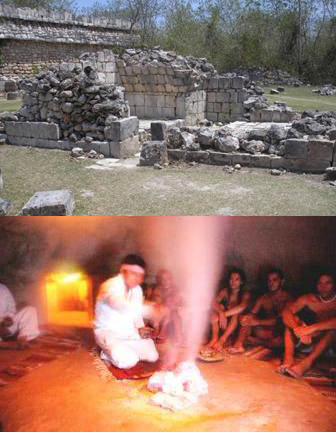 New York Times Article Before Rome’s Baths, There Was the Maya Sweat House